Being one of the famous tourist spots in India, the state and central government takes special care to provide fast and comfortable transport facilities. Dalhousie is nowadays easily reachable for most of the important cities of the country through all air, rail and road ways.

Dalhousie is well connected with all major cities of Himachal Pradesh and other nearby states of India. Moreover the roads in Haryana and Punjab are excellent. Besides Himachal roadways and some other state roadways, some private players also operate buses from all important cities to Dalhousie. Himachal Road Transport Corporation as well as Haryana Road Transport Corporation operates a few semi-deluxe buses from ISBT, New Delhi to Dalhousie. The journey takes around 12 hours to reach the city and the fare is around Rs 350. You can see the detailed time table of Himachal Roadways buses in their website Himachal Roadways. 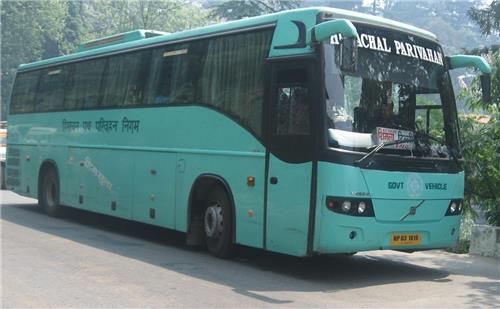 Himachal Roadways Bus Services
Travellers can also depend on all types of luxury sleepers, semi-sleepers, Volvo buses from Delhi to Pathankot, which further run to Jammu. Public transport or taxies are available from Pathanakot to Dalhousie. In case of deficiency of direct buses, you can take a bus to Chamba, which will pass through Banikhet. This place is around 7 km away from Dalhousie.

The road distance between Delhi and Pathankot is approximately 560 km. Delhi-Ambala-Ropar(Rupnagar)-Hoshiarpur-Dasayu-Pathankot is the route. Road is generally excellent up to Karnal on the Delhi-Ambala stretch. But, there are many diversions due to unfinished overpasses from Karnal to Ambala. The road from Ambala to Chandigarh is smooth. You get an excellent single lane toll road from Chandigarh to Ropar to Hoshiarpur.

The nearest airports to Dalhousie are Gaggle (Kangra), which is around 125 km away from the city, Amritsar Airport, which has just 5 hours distance from Dalhousie by bus and Jammu Airport, which is at a distance of 180 km from Dalhousie town. Kingfisher is the only airline that provides service on this route from Delhi. But, sometimes the flights may be canceled or delayed due to unpredictable weather conditions of the hill place. Bus services are available from Kangra to Dalhousie at regular intervals. The bus fare from Kangra to Dalhousie is Rs 150. The bus journey through this route is really interesting as you can see some best scenic views and can interact with local people the way. Hardly five to ten huses are seen in the middle of mountains. People can also hire taxi from the airport to Dalhousie.

There is no railway station in Dalhousie. Pathankot and Chakki Bank are the nearest broad gauge railway stations to Dalhousie and it is around 80 km away from the city. Regular trains are available from all over the country to Pathankot and Chakki Bank. It takes an overnight journey in train to reach Pathankot from Delhi, which requires almost 10 hour. You can reach Dalhousie with drive of 2-3 hours from pathankot. Chakki Bank is at a distance of only 4 km from Pathankot. Public transport is available from Pathankot bus stand to Dalhosuie and Chamba. Those, who board a bus to Chamba, should get down at Baniket, which is at a distance of 7 km from Dalhousie. You can also hire private taxi from Pathankot railway station and bus stand to Dalhousie at negotiable rate. Road route takes around 3 hours to reach Dalhousie.

Distance from Delhi to Dalhousie is nearly 560 km and the journey takes around 8-10 hours to reach the city. Karnal-Ambala-Ludhiana-Jalander-Pathankot-Dalhousie is the advisable route. As the highway is well built, the dirvers can maintain and average speed of 70-80 km per hour. The distance between Pathankot and Dalhousie is 72 km. As it is a hilly terrain with unpredictable weather conditions, we cannot expect smooth road conditions always. So, continuous drive from Pathankot to Dalhousie is not advisable and avoiding night driving is not safe, if you are not comfortable. However, driving towards Dalhousie watching rivers, hills, zig-zag roads with beautiful greenery will really a mesmerizing experience.

Public transport, private taxies and rickshaws are the common options for local transportation in Dalhousie. As it is very cold in the evening, it is better to avoid motorcycle. Even though you get Pony rides in G.P.O and Khajjiar, it cannot be considered as a functional one. It is mostly for recreational purpose. Walking around Dalhousie is also a good option. However, you may have to hire any type of transport to see other places that are far away from the town. You get taxies easily from the main market. Moreover, there are buses in every half an hour at a fare of Rs 97 from Pathankot to Dalhousie.

Even though Dalhousie is a hilly area, transportation to this beautiful town is not a difficult task, as there are sufficient road, rail and air way services by Government and private teams. That is why itself, the city is becoming developed day to day and is growing one of the most famous visited tourist locations in the country.