Dalhousie apart from its famous tourist location and scenic beauty is also known for its cultural richness. Being a favorite summer vacation destination of British rulers in India, most of the ancient buildings and churches here showcases English style. Scottish and Victorian architecture is more prominent in the churches and bungalows in the city. At the same time, Dalhousie is a storehouse of ancient Hindu culture, art and temples. There are many handicrafts here that are preserved under the longest-running single dynasty since the mid-6th century. 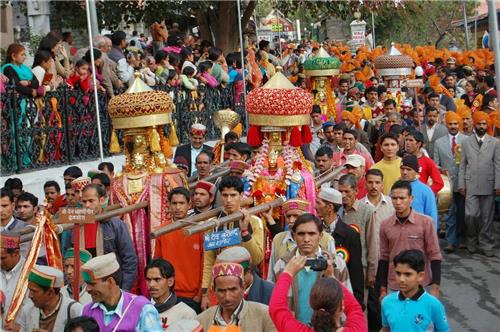 Culture of Dalhousie
As many Tibetan refugees came to Dalhousie during 1959, when China took over Tibet, you can see the influence of Tibet culture in the monuments and other building here. The many road-side rock sculptures and a Tibetan market near the GPO are the examples of influence of Tibetan culture in the city. This hill city is a gateway to the ancient Chamba Hill State. Chamba is the center of this culture. There are many Gaddi and Gujjar tribes in Bhamour, the ancient capital of this kingdom. You can also see 84 ancient temples that dated from the 7th-10th century AD.

Dalhousie is a famous tourist spot, where people from all over the country visit. However, the culture and traditions of the people in this remote hill remain uninterrupted from outside influence. Since 7th century AD till 1947, Rajput Hindu family ruled Dalhousie. Influence of Muslim and British people was minimal during this period. Now people of various religions live here. But, tribal people constitute a major portion of the people in Dalhousie. Gaddis are an ancient tribe in Dalhousie and they are nomadic shepherds. This group usually migrates to higher plains in the summer and returned to lower land in the winter. Center of their culture is Bharmour. Women in Gaddhi tribal group wear heavy silver jewelry Pangwals, who live in the Pangi Valley, are robust people. Bhots are mixture of the Mongol and Aryan races, are also live in the Pangi Valley. They follow a mix of Buddhism and Hinduism. The custom of marrying a single woman by several brothers, which is called as Polyandry, is a common practice in this tribe. Guijjars have Central-Asian origin and shift to high mountain ranges with their cattle during summer season. Dairy products are the main source of income of this tribe. Dhogrias, who live in Lakarmandhi near Dalhousie, are a local tribe. They make coal by burning wood in the underground kilns to make a living.

Minjar fair : This famous fair is the most awaited event of the year for the people in the Chamba valley. This fair that lasts for one week is celebrated in the month of August of every year. Thousands of tourists and local tribal people congregate in the Chamba Chaugan. There is a procession from the Akhand Chandi Palace to the bank of the Ravi River is held at the final day of the festival. Minjar ( A coconut, a fruit, a coin and a few sherfs of paddy are tied ina piece of red cloth is called Minjar) is offered to the Ravi River. It is believed that Minjar fair started when the Raja of Chamba defeated the ruler of Trigarta, now known as Kangra in A.D 935. People greeted the king with sherfs of paddy and maze, when he returned after the battle.

Dalhousie town generally has a food style that is similar to that of other North-Indian states. The typical staple meal here consists of dals, rice, broth, roti and sabzi. They also prepare some unique delicacies such as Patande, Chouk, Aloo palda, Kali Dal, Bhagjery and spicy lotus items etc. Several types of fruits are also available here.

People of Himachal Pradesh know how to dress up attractively. You can see a dash of clolors to most of the outfit they wear. The people in Dalhousie, especially tribes use Kurtas, which are embroidered in intricate patterns. The women generally wear scarves as a head cover. ‘Kullu Topi’ or cap, which helps keep people warm, is also a part of their outfit. Tourists, who visit Dalhousie, can try out these outfits, as they are available in any local garment shops.

To conclude, visiting Dalhousie not only makes you refresh with its amazing scenic beauty and cool and pleasant climate, but it also provides you an opportunity to enjoy the cultural richness and traditional uniqueness of this ancient city.