Dalhousie, a hill station in Himachal Pradesh is one among the most visited tourist locations in the country. Known as ‘Switzerland of India’, this heavenly land attract all types of tourists from various corners of the world. Besides, the scenic beauty of Dalhousie, the historical importance and cultural specialties of the city are also very famous. The city has played significant role during British rule in India. As a gateway to Chamba district, Dalhousie is also a main commercial hub of the state. 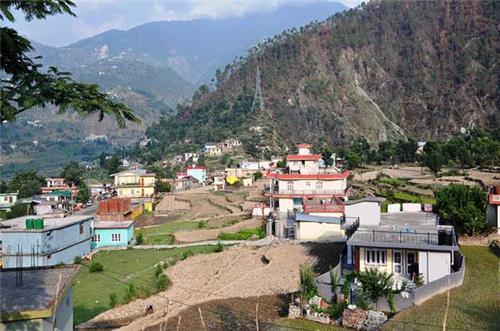 The credit for founding the hill station of Dalhousie goes to Britishers who founded the town in 1854 as a summer retreat for British troops and bureaucrats. The city was given the name of Lord Dalhousie, who was the British Governor-General in India at that time. Five hills namely Kathalagh, Potreyn, Terah, Bhangora and Bakrota were acquired by the British from the ruler of Chamba state for developing the area as a retreat. They reduced the taxes of the ruler in return. Dalhousie was a summer destination for Englishmen, military officials and soldiers. That is why most of the buildings seen here are in English style.

Three level malls around Bakrota, Terah and Potrein hills were laid down in 1860. The roads, which connect these malls are still functioning as the main arteries of the city. St. John’s Church was built at the G.P.O, which is now called as Gandhi Chowk, in 1863. Later St Francis Church at Charing Cross in 1984, St. Andrew’s Church at Dalhousie cantonment in 1903 and St. Patrick’s Church near the military hospital at Dlahousie Cantonment were also built. Electicity was started to be distributed in 1920 with the help of a large generator using diesel.

Dalhousie became famous as tourist destination during 1920s-1947. Pt.Nehru, the then Prime Minister of India visited Dalhousie in 1920s to preside over the centennial celebrations of Dalhousie. He, with the call ‘Let us go to Himalayas’, initiated the promotion of tourism. In 1959, when Tibet was taken over by China, several thousand Tibetan refugees came to Dalhousie at the insistence of Pt. Nehru. Even though most of them have left the town, the many road-side rock sculptures and a Tibetan market near the GPO shows the influence of Tibetan culture in Dalhousie. Dalhousie was transferred to Himachal Pradesh state from Punjab state, during the formation of current state of Punjab in 1966. Dalhousie was one of the favorite shooting locations of Bollywood in 1990s. Manyfamous Bollywood films like 1942: A love story, Gadar and Vinashak etc were filmed here.

Situated in Chamba district of Himachal Pradesh, the northern state of India, Dalhousie is a hill station. The city is located on five hills named Kathalagh, Potreyn, Terah, Bhangora and Bakrota with an elevation of1, 970 metres above sea level. Dalhousie is situated on the western edge of the Dhauladhar Mountain of the Himalayas and is surrounded by snow-capped peaks. There are many hydroelectric projects and dams being developed in Dalhousie town. You can also see several wildlife sanctuaries and national forests including Kalatop-khajjar within the boundaries of the city.

Dalhousie experiences cold comfortable climate throughout the year that makes this hill city the favorite tourist location for the people. The pleasant atmosphere here makes you feel refresh . So, ideal time to visit Dalhousie depends on the visitors. Summer season in Dalhousie is cool and pleasant. The maximum temperature here in this time is 24°C. Tourists can enjoy the lush green forests and majestic Bakrota hills in this time. In winter, the temperature drops to freezing point with a minimum temperature of 0°C. But, if you want to see the mind-blowing snow falls, you have to visit Dalhousie in winter. Peak winter season lasts in December and January. Dalhousie becomes cloudy and foggy during monsoon season and heavy fog takes over the city. You may feel that people are walking through clouds at this time. The months between June and September experience thunder showers and heavy rain. The months from May to July have warm mornings and afternoons, but cold and comfortable evenings and nights. Read More..........................

Tourism is the most important industry in Dalhousie. There are large number of hotels, resorts and restaurants in the city. The city has around 600 hotels that give job opportunities for more than five thousand people. The 3% of the gross domestic product of Himachal Pradesh is contributed only by Dalhousie.

Dalhousi is also one of the 66 legislative assembly constituencies of Himachal Pradesh. The sitting MLA in this seat is Asha Kumari, who belongs to Indian National Congress. Dalhousie assembly constituency comes under Kangra Parliamentary constituency and the MP here is Shanta Kumar from Bharatiya Janata Party. Dalhousie is one of the six sub-divisions and one of the seven tehsils of Chamba district. It is a municipal council city, which is divided into nine wards. Supplying basic amenities like water and sewerage to the people in the city is the responsibility of Municipal Council.

The Government of Himachal Pradesh has ensured proper disposal of health care services to the people in Dalhousie. If you need any urgent medical support, please don’t forget to dial 108, which is an emergency medical support service provided by Himachal Pradesh Government. It includes first aid and an ambulance. There are a few reputed government owned and private hospitals in the city. Chamba District Hospital or Pathankot are the places that people select first for any major problems. Some of the popular hospitals in and around Dalhousie are given here.

Himachal Pradesh has a platter that is similar to that of other North-Indian states with similar styles, elements, ingredients and delicacies. The food culture here is influenced by the flavors and styles of Punjabi and Tibetan cuisine. Dals, rice, broth, roti and sabzi are included in a staple meal here. Meat, especially red meat is also popular here. There are many other unique delicacies here like Sidu, Patande, Chouk, Bhagjery, Kali Dal, Aloo palda, Auriya Kadoo and spicy lotus items etc. besides the staple meal. Pickles are a common item served in most of the eating joints here. Fresh fruits are also available here at cheap rate.

Knowing more about the historical significance and cultural uniqueness of Dalhousie will help you make your trip to this beautiful land more enjoyable and worthy. It is sure that everybody returns from this hill station with a handful of beautiful memories about the days spent in the snow-capped mountains and valleys.

Dalhousie at a glance